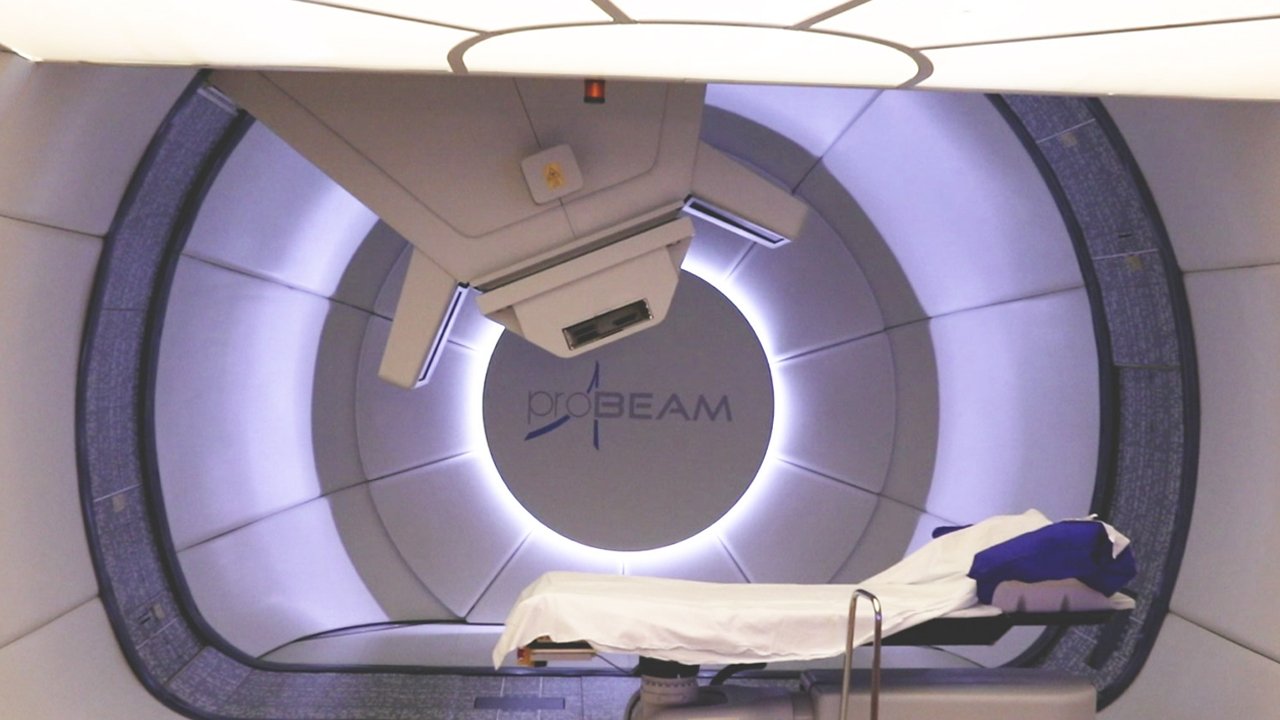 In a locked room in West Chester, Ohio, a 90-ton machine accelerates millions of proton particles.

These particles zoom and turn through a tube and out of a beam nozzle inside a patient treatment room.

Within seconds, the particles enter a human body. This beam of protons stops, with millimeter precision, on a bundle of tumor cells.

But the man lying on the table in a proton therapy gantry receiving this form of cancer treatment can’t tell the difference. This form of therapy doesn’t hurt; there’s no visible beam of light; and the radiation itself makes no sound.

Instead, he rests under a blanket, eyes closed, hands under his head.

Soft acoustic music still plays from the last patient’s treatment. One of the radiation therapists switches to a song that better suits this patient’s tastes—Journey’s “Any Way You Want It.”

Now he waits, as proton particles work to destroy the cancerous cells in his body so that they can no longer divide and multiply. The healthy cells that surround the cancerous ones are mostly spared. 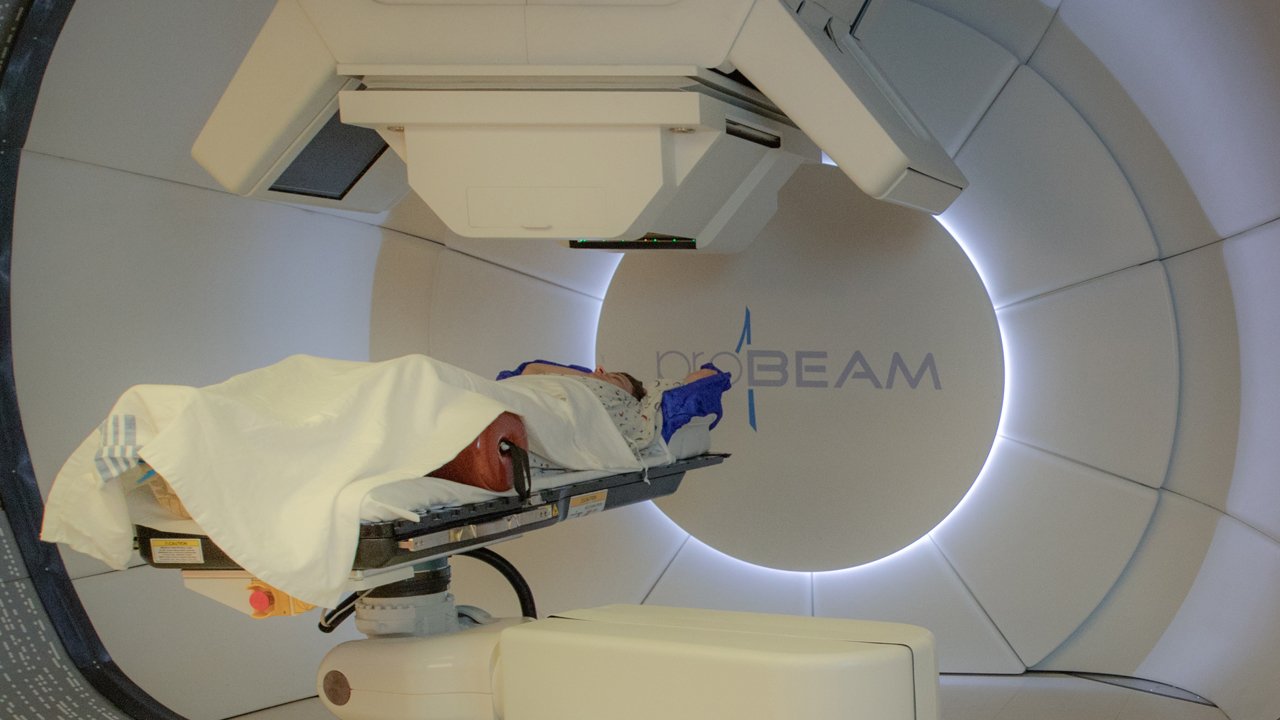 In the world of cancer care, proton radiotherapy is a relatively new form of radiation treatment. Though the science behind proton therapy isn’t new, its clinical use only began growing in the United States in the 1990s.

The Cincinnati Children’s/UC Health Proton Therapy Center is the only of its kind in a 200-mile radius and one of only 27 in the country.

An Ohio native and alumnus of UC College of Medicine, Dr. Kharofa said the Proton Therapy Center was just one of many reasons he decided to return.

While proton therapy isn’t the best course of treatment for everyone (most of the radiation Dr. Kharofa prescribes is traditional radiation), it can make cancer care easier for patients who do benefit from it by limiting side effects.

That’s because the radiation dose is limited to the cancer itself, bypassing healthy tissues and organs.

There isn’t enough evidence yet to prove whether proton therapy is more effective in treating the cancer than photon radiation—but it might be. UC researchers are trying to find out.

“These are the types of questions that academic centers like ours that are trying to help answer,” Dr. Kharofa said. 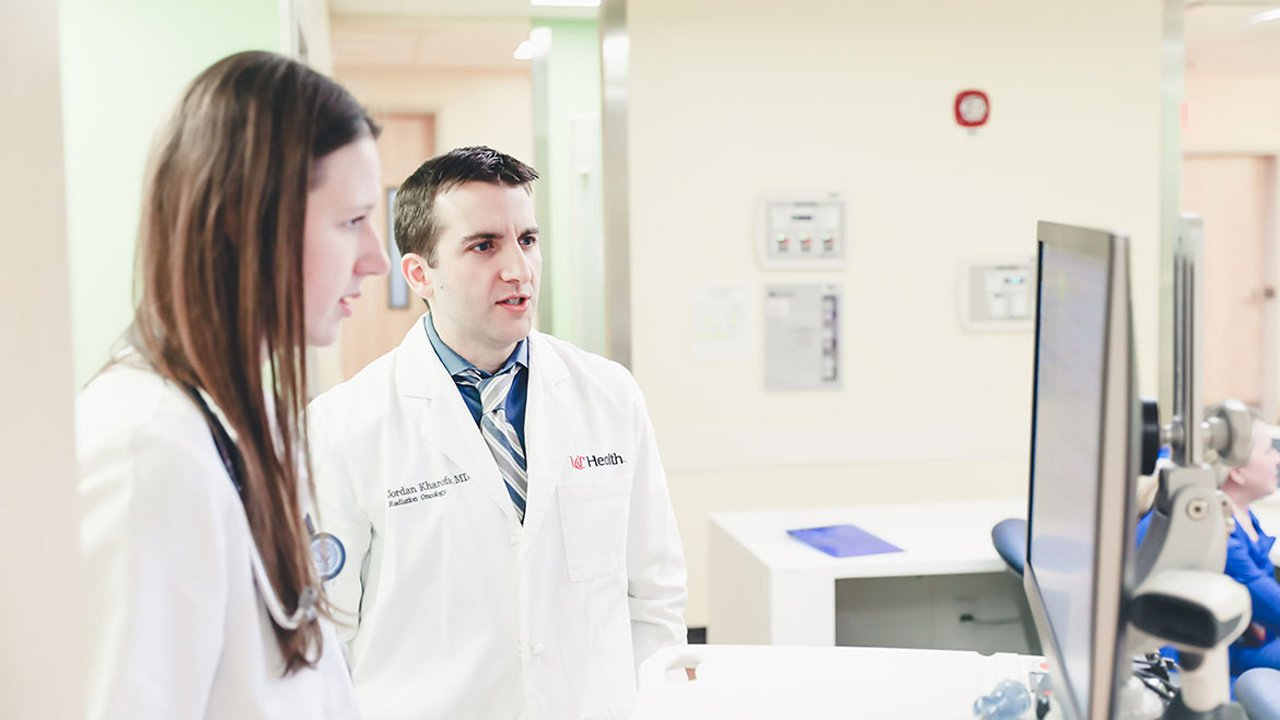 All of it is part of something much, much greater.

“On a day-to-day basis, we’re taking care of patients,” he said. “But I think everybody has this team approach where we’re committed to advancing the field, moving things forward and not being satisfied with the status quo treatments.”

Because everyone has a story. Because our collective stories would have much different endings if it weren’t for the nondiscriminatory hand of cancer.

“It’s the ‘Emperor of All Maladies,’” said Dr. Kharofa, referring to a well-known cancer book by Siddhartha Mukherjee of the same name.

“It’s true. Cancer has no regard for your social circumstance, your ethnicity, your gender. Everybody’s affected. I think that’s why there are a lot of passionate individuals that are fighting this fight.” 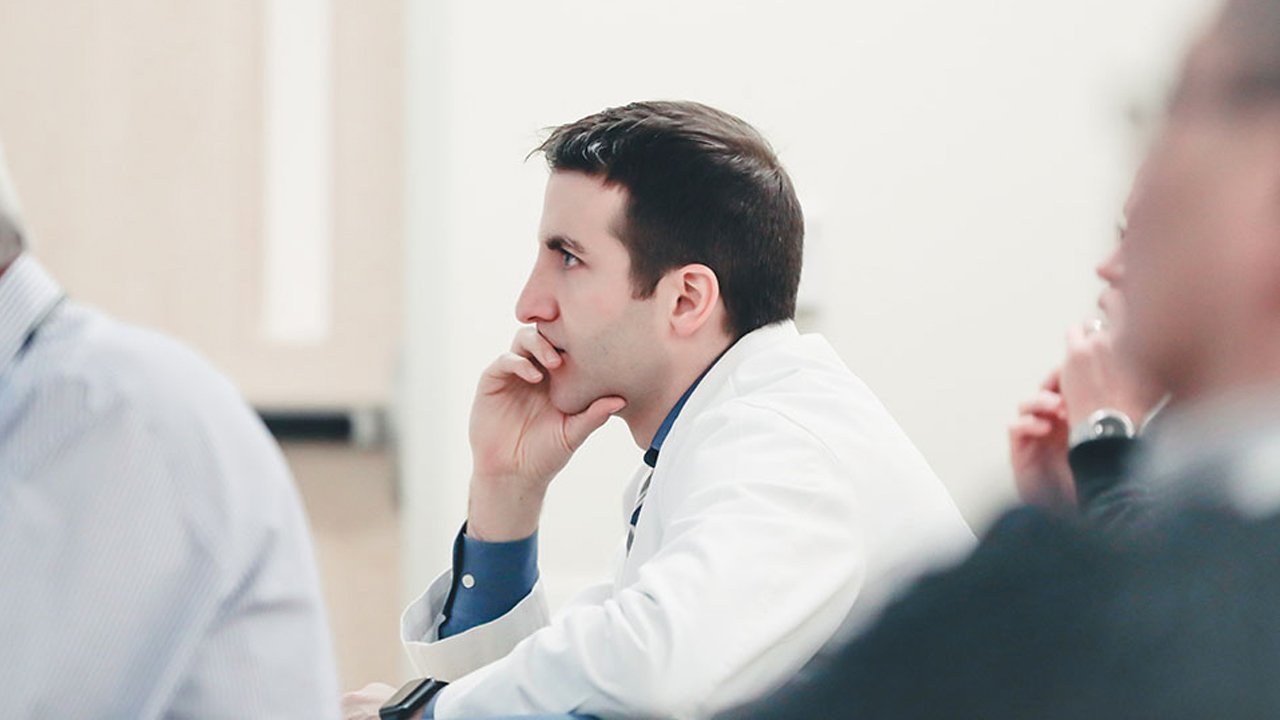 As a medical student, he took an interest in pancreatic cancer—one of the cancers with the lowest survival rates. His interest continued through residency in Milwaukee, where he spent a lot of time researching the disease.

Then it became personal.

“I got a call one day saying there’s this question, there’s some concern, and when I saw the images, I knew right away this was going to be pancreas cancer, and this was not going to be something that was ultimately going to be removed through surgery,” he said.

It was his stepfather. His trip to Milwaukee, originally scheduled to attend Dr. Kharofa’s residency graduation, ended up also turning into clinical visits.

“I was able to help him make some decisions and help my family try to understand the severity of it and help guide him to some therapies that were closer to his home,” he said.

Dr. Kharofa, accustomed to being the one who walks into clinic rooms and counsels patients and families, was now the one waiting patiently for the doctor to arrive.

“It’s always eye-opening being on the other side as well and sitting in the patients’ family’s chair and hearing from the physicians what most patients go through,” he said. “I think it makes you more appreciative of what patients need on the other end.”

His stepfather did OK for a while. He was able to continue doing the things he loved. Eventually, the tumor couldn’t be controlled any longer.

“Cancer, unfortunately, is such a terrible disease that if you spend time talking to anybody, it’s very likely that they have somebody in their immediate family, friends, secondary family that has had cancer. I think that’s what draws a lot of people to this field, in general, is trying to move the whole specialty forward. There’s a lot of momentum behind that.” 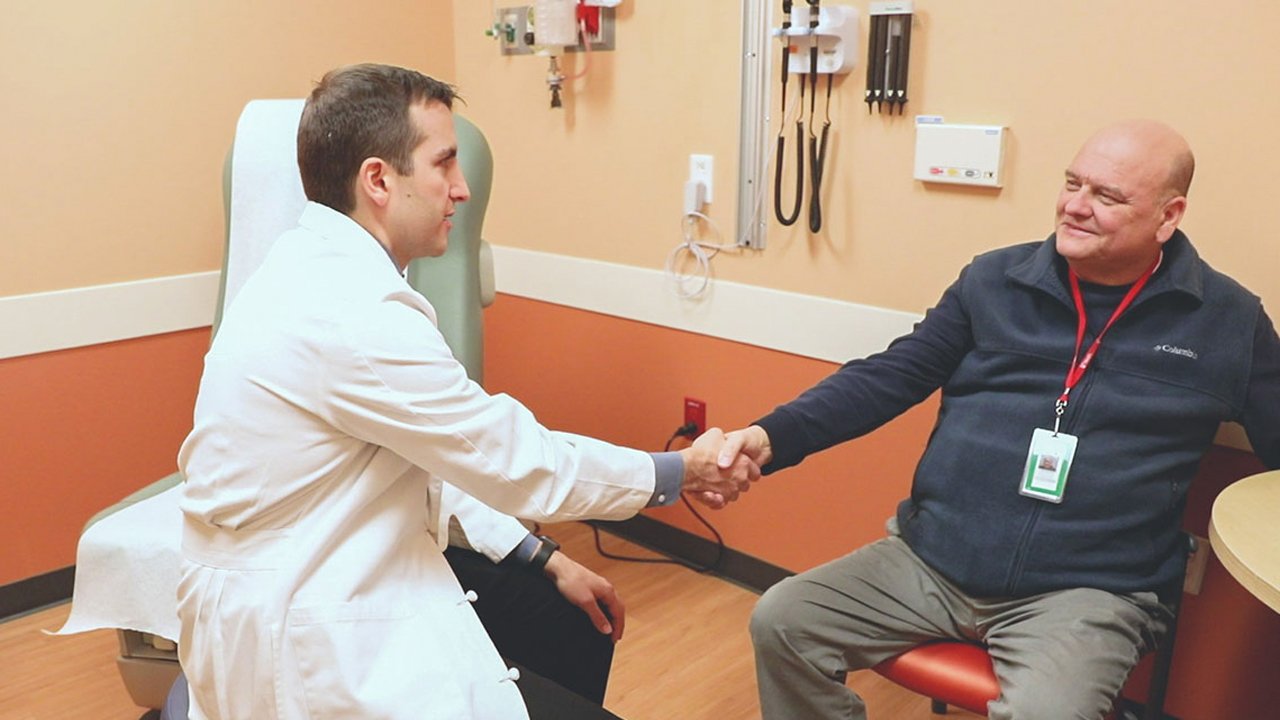 Dr. Kharofa, now entering his fifth year as a faculty physician with UC Health, was a third-year medical student at UC when he first shadowed a radiation oncologist as part of his clinical rotations.

“I knew immediately that I wanted to be a part of cancer care,” he said. “You get to see these patients through a very rough patch in their life, and many of them do well.”

Patient interaction makes up the majority of his days. People undergoing radiation treatments for several weeks will visit Dr. Kharofa in clinic once a week. He will see them on initial visits, throughout the planning stages and even 10 years out from their cancer care. He gets to know their families, their hobbies. He becomes an important part of their lives.

His joy in his work comes through during a clinic visit with a retired high school teacher, Alan, who is undergoing proton therapy treatments for recurrent cancer. He and his wife are sitting next to an exam table, smiling, when Dr. Kharofa enters the room.

“How’s it going?” he says, sitting on the stool and wheeling close to the couple.

“I think I feel better, as crazy as that sounds,” Alan says.

He has a list of eight questions for Dr. Kharofa on this day. Among them—Can he still play golf while undergoing treatment? (The answer is yes.)

“We’re down to six,” Alan says. He’s almost finished with his treatment course.

One more thing before the clinic appointment ends—Alan tells Dr. Kharofa how much easier proton therapy has been compared to his photon radiation treatments of the past.

“This is much better.”