Husband and father of two has life-saving organ transplant during COVID-19.

Lewis County High School Guidance Counselor Undergoes a Liver Transplant at UC Health in the midst of a pandemic. 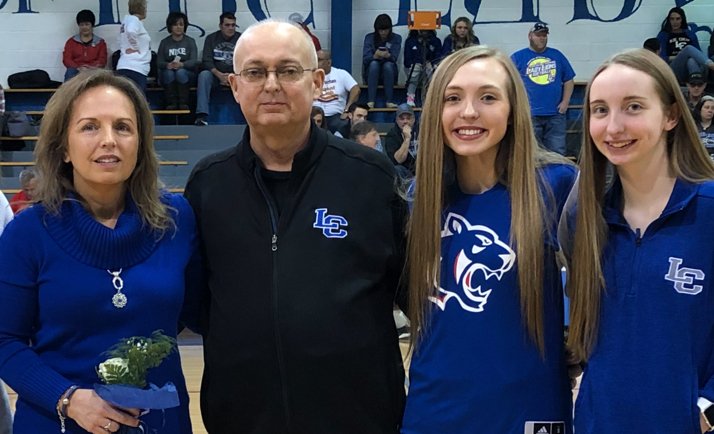 Early in 2020, Kevin Lewis, 50, was walking through the hallways of Lewis County (Kentucky) High School as a guidance counselor, just as he had for the past 19 years after spending eight years as a teacher and girls’ basketball coach for the school. His wife, Paula, also works for Lewis County Schools as director of special education and preschool. Their two daughters, Macy, a senior, and Jaden, a freshman, are students at Lewis County High School where they both play basketball.

Kevin’s love for basketball has continued over the years, and he was planning on heading to the Kentucky Girls’ Basketball State Tournament in March, just like he’d done nearly every year since 1996. But his plans changed due to his rapidly-declining liver function.

Two years earlier, Kevin was diagnosed with Non-Alcoholic Steatohepatitis (NASH), the most severe form of non-alcoholic fatty liver disease. His condition remained stable until late-Jan. 2020. When he saw his gastroenterologist in Portsmouth, Ohio, he was told that he would need a liver transplant in the near future.

“It’s still a shock to me how fast my condition had spiraled downhill,” Kevin said.

His doctor in Portsmouth recommended that he travel to Columbus, Ohio, for further care after spending 12 days in the hospital for treatment. But Kevin and his family knew there was a health system that was much closer and could offer him the care he needed — UC Health.

“We’ve always known how great UC Health is. This was an easy decision,” Kevin said.

Throughout COVID-19, UC Health has continued to offer world-class care for patients who need life-saving organ transplants. Among the busiest organ transplant centers in the U.S., the UC Medical Center performed 133 liver transplants in 2019.

On Feb. 18, Kevin came to the University of Cincinnati Medical Center, where he saw Michael Schoech, MD, UC Health transplant hepatologist and assistant professor of medicine in the Division of Digestive Diseases at the UC College of Medicine.

“Mr. Lewis was extremely ill with a high model for end-stage liver disease (MELD) score, which establishes where patients are on the liver transplant waitlist,” Dr. Schoech said. “Given the severity of his liver disease, our transplant team moved quickly to have him evaluated and listed for transplant. It is a testament to our team approach at UC Health.”

Kevin and Paula attended a liver transplant clinic in Cincinnati hosted by Shimul Shah, MD, UC Health surgeon and the James and Catherine Orr Endowed Chair in Liver Transplantation, director of the Division of Transplantation and professor of surgery at the UC College of Medicine.

Kevin returned to Cincinnati for additional testing in early March. After failing his tests as a result of fluid buildup, he was admitted on March 18 to the Emergency Department at UC Medical Center. He was forced to spend his 26th wedding anniversary at the hospital without Paula or any of his family.

Dr. Schoech told Kevin that he would need to get onto the transplant waitlist to find a healthy liver. Two days later, there was a match for Kevin.

Right before Kevin was supposed to have his liver transplant, test results revealed a possible issue with his lungs. The concern was that he had COVID-19. As a result, he had to go on COVID-19 watch in the hospital and couldn’t have the new liver transplanted. The liver would have to go to another patient.

Thankfully, Kevin did not have COVID-19 and was cleared a week later for a transplant. The key would be finding another liver for him. But just about two hours later on March 30, a second liver match was found for him. This time, there weren’t any roadblocks for Kevin’s transplant. He had his procedure just a few hours later in the early morning hours of March 31.

“Dr. Bailey and I are grateful to have been a part of Kevin’s journey to getting healthy,” said Dr. Diwan.

Almost immediately after his procedure, Kevin felt better than he had in years. He returned home to his family on April 6. It took him a while to realize that he had just undergone a high-risk surgery during the biggest pandemic in 100 years. He remains grateful for his UC Health care team.

“Overall, I was there for about three weeks,” Kevin said. “The doctors and transplant coordinators took the time to talk with me and my family anytime, even though they weren’t allowed to visit. Everyone was so nice, before and after surgery.”

The Road Ahead Post-COVID-19

Moving forward, Kevin hopes to return to Lewis County High School in the fall, where Jaden will be a sophomore, with the rest of his colleagues and students. He also hopes that he and his family can eventually take their vacation trip to Hawaii that was originally scheduled for this summer to celebrate Macy’s high school graduation but will be postponed due to COVID-19.

But these plans are made possible thanks to his life-saving procedure at UC Health. Kevin and Paula are optimistic that one day, they will be able to meet and thank the family of the donor who gave him hope for a new life.

“I’ve thought about organ donation before, but never signed up. But now, I plan on signing up,” Paula said. “We have had other people tell us that they have now signed up too. It’s still unbelievable that this all took place, and very eye-opening knowing this could happen to anyone.”

The Lewis family remains grateful for everyone involved in Kevin’s transplant journey.

“We want to thank our family, friends, coworkers, students and community for keeping Kevin, our family, the donor family and the doctors and nurses at UC Health in their thoughts and prayers throughout his illness, surgery and recovery,” Paula said. “We want to thank UC Health, their transplant team and everyone involved in Kevin’s care. We want to thank the donor’s family for giving Kevin a second chance at life, and to know that we have kept them in our thoughts and prayers and will continue to do so. Most importantly, we want to thank our Good Lord for making all of this possible. We are very blessed and are thankful for so much!”

UC Health continues to offer world-class care to the community during this difficult time. Whether you need a transplant, emergency care or just need to see your primary care doctor, our facilities are open for you whenever you need it.

“If you feel bad at all, go to the doctor,” Kevin said.

As unusual as it is, Kevin’s older brother has the same liver disease that he has. He plans on coming to UC Health to receive the care he needs, just like his brother did.

Kevin will be a source of hope as his brother goes through a similar journey.