“I do not have the words to express how grateful I am for what she has done for me,” Melissa Kinnaird said of her live kidney donor. “It has really changed my life, and it has changed my life for the better.” 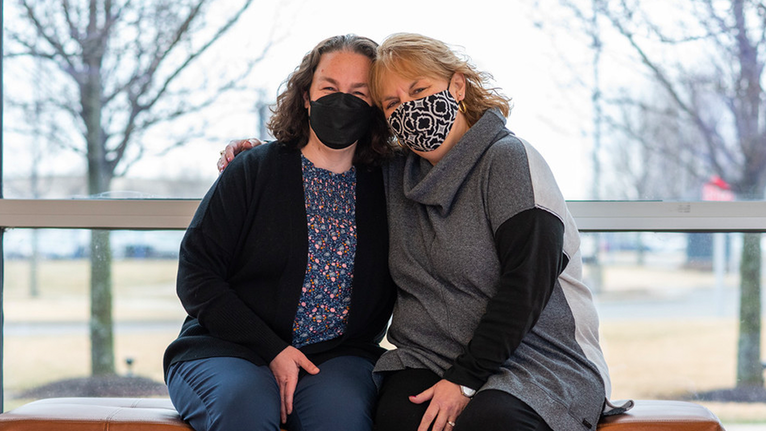 Melissa posted on Facebook in 2021 seeking a perfect match for a live kidney donor after she found out she was in stage-five kidney failure. She was tired, and admittedly, didn’t realize how sick she really was until after her transplant. Before she needed dialysis, she made the difficult decision to ask for help, which would be received with over 300 likes, comments and shares from both friends and strangers.

“I knew from working in the healthcare field that there are multiple thousands of people waiting for a cadaver organ,” Melissa said. “I knew that going the living-donor route would be the best. I thought, if I send this out on Facebook, maybe good karma will come back to me.”

Melissa had it right—according to the American Transplant Foundation, more than 106,000 people in the United States are currently on the waiting list for a lifesaving organ transplant, with another name added to that list every nine minutes. Seventeen people die every day from the lack of available organs for transplant.

A True Act of Selflessness: Amber Donates her Kidney

Melissa had no idea that her former coworker and fellow nurse, Amber Serna, had done the blood, urine and psychological testing, and electrocardiograms and cancer screenings—and finally had board approval to be Melissa’s live kidney donor.

“To be honest, at the time, it was just kind of on the fly,” Amber said. “I saw the post that a mutual friend had shared in the middle of the night, and I just took it from there.”

Melissa and Amber were not friends—in fact, they didn’t know each other outside of a work setting. She even scheduled a meeting in the office to give her the good news.

“I wanted to let Melissa know myself—I was looking for all sorts of cute ways to tell her,” Amber said about their meeting, “but I just asked her how she was doing, and I finally told her that I was her match, and that we were at a point where we could schedule surgery.”

With Amber’s selfless decision to donate a kidney, Melissa waited mere months for her lifesaving donation. In August 2021, on the same day at UC Medical Center, Amber and Melissa underwent surgery.

“Throughout the process, the surgeons, the nephrology team, the nephrology nurse practitioner, the transplant coordinators—everyone; I felt that I was in good hands,” Amber said. “From point A to point Z, I still feel like my health is important to them.”

Melissa and Amber’s team included Madison Cuffy, MD, MBA, surgical director of the UC Health Kidney Transplant Program and associate professor of surgery at the University of Cincinnati College of Medicine, and Cutler Quillin, MD, transplant surgeon and assistant professor at the UC College of Medicine, among other providers, including pharmacists, transplant coordinators and nurses.

“One thing we tell every patient that steps through our doors is that at the University of Cincinnati, is that you’re joining a family,” Dr. Cuffy said, “all of who have one purpose—to help these patients.”

“The feeling that I get when I participate in any transplant, or if I’m involved in a living donor transplant, is unlike any other,” Dr. Quillin said. “We spend an incredible amount of time as surgeons preparing for these moments—it’s an incredibly special and rewarding thing.”

In 2021, more than 6,500 transplants were made possible by living donors, according to the United Network for Organ Sharing (UNOS), which were just a fraction of those that totaled more transplants in a single year than ever before—including an 8% rise in kidney transplantations.

Melissa and Amber now refer to the donated kidney as their kidney—not one or the other’s.

“My decision is one of the moments in my life that has probably impacted me the most,” Amber said as she describes her generous decision. “This is a decision you make from your heart. It’s impacted me emotionally, spiritually, how I live, how I make decisions—it’s one of the things that I will be most proud of in my life.”

“I feel so much better now,” Melissa said. “I just feel like I can get out there and enjoy life. I realize that it’s time to start living my life much healthier because I have gotten a second chance at living.

If you are interested in learning more about making or receiving a lifesaving donation like Amber and Melissa, call 513-584-7001 for more information.