Former neonatologist and Daniel Drake Medal Award winner gets diagnosed with glioblastoma in 2019, but continues to speak, teach and travel with family. 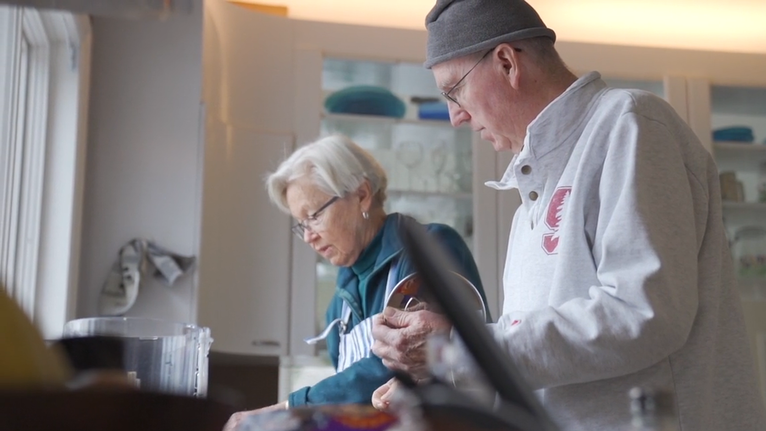 Alan Jobe, MD, of Indian Hill, Ohio, has led quite the successful life—as a longtime neonatologist at Cincinnati Children’s Hospital Medical Center and professor, Alan has spearheaded research efforts around the country and around the world with his partners in Australia. He received the Daniel Drake Medal Award—the highest honor given by the University of Cincinnati College of Medicine. His accolades are endless—his impact on research and the field of science is easily seen.

Alan spent 20 years at University of California Los Angeles and has given lectures all over the world—including Vienna, Italy, and Bangkok, Thailand.

Now in emeritus retirement status, Alan enjoys life with his wife and family. He still loves to garden and travel around the globe as much as possible, but if you see Alan, you may notice something about him. He wears the Optune Device,  a wearable, portable, FDA-approved treatment that disrupts cancer cell division.

Alan was diagnosed with glioblastoma in Nov. 2019 after suffering an episode during a presentation to medical students and fellows in the hospital, where he completely lost his ability to speak.

“The first time I knew something was really wrong was the night before I was presenting and I couldn’t use my chopsticks,” Alan explained. “The next day, I was in doing teaching rounds at UC [Medical Center] in the ICU and I was talking with residents, and I basically went aphasic—I couldn’t talk.”

Initially, Alan thought he had a stroke, but doctors at UC Medical Center discovered an aggressive and rare type of cancerous brain tumor—a glioblastoma. . Although it was easy to receive treatment at UC Medical Center because he was already there, it was also the best place for him. UC Health is home to the UC Brain Tumor Center, which features world-renowned experts capable of diagnosing and treating the most complex cases.

“Alan has glioblastoma, which is a World Health Organization (WHO) grade IV brain cancer,“ Soma Sengupta, MD, PhD, Harold C. Schott Endowed Chair of Molecular Therapeutics, UC Health neuro-oncologist and associate professor in the Department of Neurology at the UC College of Medicine said. “It’s highly aggressive and the survival rate of this brain cancer is abysmal.”

To give Alan a chance at survival, his care team at UC Medical Center performed surgery to try and remove the tumor, which was in his right frontal lobe, and was the size of a tennis ball.

Despite showing no symptoms and having reasonably good health, Alan was now amid a grim prognosis, and the lifelong physician would have to now be a patient, something he wasn’t used to.

The Multidisciplinary Approach: Glioblastoma treatment from every angle

Alan’s treatment plan included radiation therapy following his surgery. The entirety of his treatment took place at UC Medical Center and featured a multidisciplinary team of experts—many of whom have extensive experience in treating glioblastoma.

“Nowadays, it’s not enough to just have a good surgeon,” Mario Zuccarello, MD, director of the UC Brain Tumor Center, John M. Tew, MD, Endowed Chair in Neurosurgical Oncology and professor in the Department of Neurosurgery at the UC College of Medicine said. “Nowadays, what we need to offer patients is a multidisciplinary team approach to care.”

Alan went through one round of radiation therapy and chemotherapy. He had to stop working as a physician due to side effects, but he didn’t give up—nor did his care team. Now, two and a half years since his diagnosis, Alan is alive and well, and his tumor is under control. He still wears the Optune Device, which hasn’t kept him from doing many of the activities he loves. 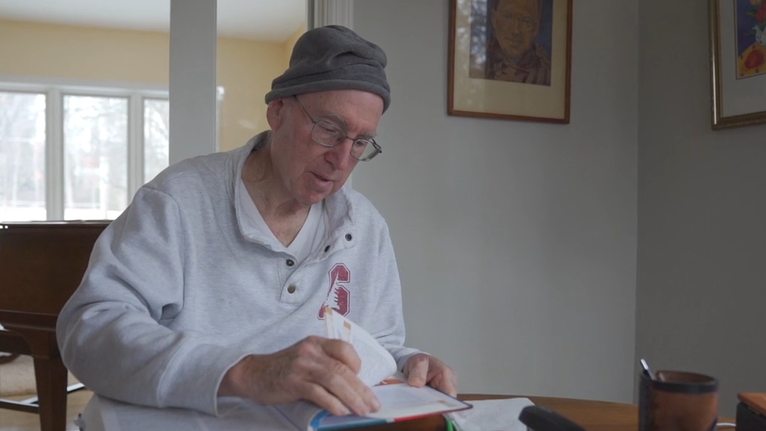 Beating the Odds: Surviving the Glioblastoma

Given that his survival odds were less than 20%, and since many glioblastoma patients don’t live beyond six months after diagnosis, Alan has beaten the odds with help from his UC Brain Tumor Center care team. He has persevered and continues to live his life as much as he can. He has limitations, but that hasn’t stopped him.

“I can’t drive [due to the risk of seizures], and I’m limited in other ways,” he said. “My ability to write is really screwed up.”

Alan has a condition called Micrographia—an uncontrollable disorder that features abnormally small handwriting and has left-side weakness in his body. His stamina and balance aren’t great, and he was limited at times on a family trip to Iceland in July 2021. He saw a lot of great things, but he couldn’t walk very far.

All things considered, these are minimal deficits, and Alan is just thankful to be alive.

In addition to his care team at the UC Health Brain Tumor Center, Alan has received support from his wife, neighbors and colleagues, who met with Dr. Sengupta to discuss his treatment options—as they all know, it can take a village.  Alan remains close with Dr. Sengupta, who he says is attentive to all his concerns.

“I’ve been totally satisfied with my care at UC Health,” Alan said. “The radiation therapy team is great. UC Health is a good choice for those who need care.”

Alan and his family went to the west coast in December 2021 to spend Christmas with his daughter, and he has many more trips planned, including traveling to see the many mountains and deserts the world has to offer. Even after discovering his tumor, he traveled as much as he could. Dr. Sengupta told him to go on a trip to take his mind off everything—he ended up going snorkeling in Indonesia.

As a doctor and former researcher himself, Alan knows how important the role of science is in treatments of the most complex conditions. Without science, there is no hope.

“Hope means that I can continue to be active and that I continue to do some of the things I want to do,” he said. “So, I just have to make the best of it and do the best I can and do as much as I can that satisfies me—and hope for the best.”