A Battle to Survive Tongue Cancer

When an unusually long canker sore wouldn’t heal on Ryan Rueve’s tongue, he went to the doctor for help, and was eventually led to the University of Cincinnati Cancer Center. 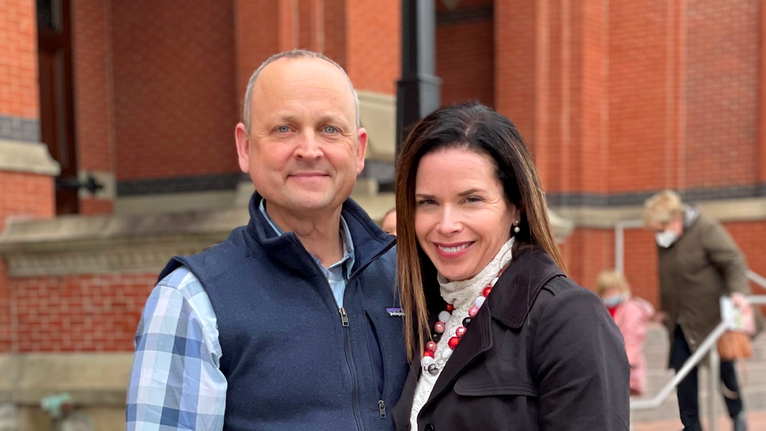 “My wife and I still remember exactly what we were doing when we got the call with the results,” Ryan said. At just 43-years-old in 2019, he was shocked to learn he had a cancerous tumor on his tongue, especially because he had never used any tobacco products. “It was the last thing in the world I would ever expect to hear,” he remembers.

Within a month, Ryan was in the operating room with Chad Zender, MD, Senior Vice President and Chief of Physician Practices, Ambulatory Services, at the University of Cincinnati Cancer. Based on his CAT scans, Dr. Zender planned to remove the tumor from the right side of Ryan’s tongue and remove other potentially dangerous lymph nodes from his neck. Ryan was prepared for a few stitches on his tongue, and to be on his way within a few hours.

Deeper Than Expected: A Partial Glossectomy

However, once in the operating room, Dr. Zender discovered that the images weren’t telling the full story.

“His tumor initially looked to be a little earlier in stage, but once we got in there, I found that it was larger, deeper and would require a complex reconstruction to maintain form and function.  I asked my colleague for an intraoperative consultation, and we agreed we should regroup for a larger procedure and discuss it further with Ryan and his wife.” Dr. Zender said.

Ryan found himself in the recovery room with a few stitches, however, he wouldn’t be on his way any time soon.

Dr. Zender informed Ryan he would have to consent to major surgery, in which Dr. Zender would have to remove a large portion of Ryan’s tongue and create a microvascular reconstruction so he could maintain function. Two surgeons would work at the same time, both a reconstructive surgeon and a cancer-removal surgeon, to help shorten the duration of this otherwise lengthy procedure.

The University of Cincinnati Cancer Center is the only medical program in the Greater Cincinnati area where surgeons regularly perform microvascular reconstructive procedures.

“We take one part of your body and try to recreate or rebuild the area that is affected by the cancer, and in this case, it was the tongue,” Alice Tang, MD, assistant professor, department of otolaryngology, explained, comparing the procedure to an organ transplant. “If we didn’t reconstruct it, he would have tremendous trouble speaking clearly, articulating, swallowing and breathing. With this extra skillset that we have at the University of Cincinnati Cancer Center, we’re able to give back to the patient a lot of the things that they have lost.”

The surgeons spent six hours in the operating room, taking skin from his inner wrist to reconstruct his tongue, and skin from his thigh to reconstruct this wrist. Dr. Zender and Dr. Tang harvested a vein with the skin, so they would be able to more seamlessly attach the new skin to his tongue—something Ryan didn’t know was possible.

Oral cavity cancer is the eighth-most popular cancer in the world, affecting mainly people who smoke or chew tobacco products. Only between five and ten percent of patients who develop an oral cancer have never used tobacco products.

Cancer Free? Not Quite...

After a few months of recovery, Ryan found out his journey was not over yet. Dr. Zender presented Ryan’s case to the multidisciplinary tumor board meeting at the University of Cincinnati Cancer Center—something only done here, which includes subspecialists in medical oncology, radiation oncology, ENT head and neck surgeons, nursing, nurse navigators, social work, speech therapy, and members of the clinical trials team.

“It’s like getting six opinions at once. We can come up with a concise plan that’s tailored to each individual patient,” Dr. Zender explained.

After Ryan’s case was reviewed by the board, the multidisciplinary team decided it would be best for Ryan to undergo radiation therapy to prevent the tumor from regrowing.

“I think rare cancers, like Ryan’s, that have a tremendously high impact on a patient need to be treated in centers like this,” Dr. Zender said. “It allows for clinicians with the most experience with this type of tumor manage the patients. Some practitioners will just see a handful of these complex cases, where we literally see several hundred patients a year with newly diagnosed head and neck cancer.”

Ryan met with Kevin Redmond, MD, radiation oncologist at the University of Cincinnati Cancer Center, go over the next step in his care plan, warning Ryan that the radiation used to treat head and neck cancers can sometimes take the hardest toll on the body.

Ryan laughs at his past self, remembering thinking, how bad could it really be? Little did Ryan know that the hardest part to his road to remission was still ahead.

An Effective but Difficult Treatment

For six weeks Ryan laid in his custom-fit mask, holding him completely still, to receive radiation treatments at UC Health’s West Chester Hospital. He didn’t notice any side effects at first, but soon developed burns on his tongue, throat and mouth—so bad that he ended up dehydrated more times than not.

Ryan was scared for his future, both for himself and for his family. Ryan was a stay-at-home dad and taking care of his two young daughters was his entire life. 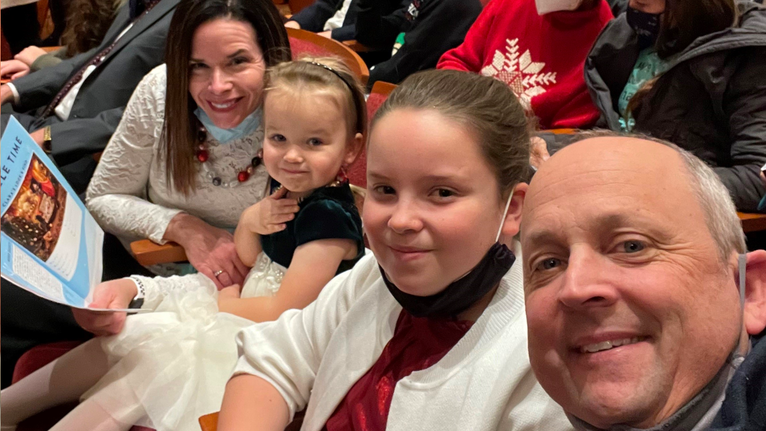 “I’m the one who takes care of them and takes them everywhere, and all of a sudden, I couldn’t,” Ryan said. His wife, a physician, relied on help from family and babysitters to juggle childcare while Ryan recovered.

After finishing his radiation in Oct. 2019, the sores in Ryan’s mouth didn’t go away for months, but it was time for him to push on in his journey and begin rehabilitation.

“If you get a cancer in your tongue, it’s not common knowledge on how it will affect you,” Dr. Tang explained. “You can’t really speak, you can’t swallow, in some cases you can’t even breathe.”

Ryan began working with highly specialized therapists at the University of Cincinnati Cancer Center—part of their approach to holistic patient care. Ryan had to relearn how to function with his newly constructed tongue. His speech therapist gave him exercises to build strength and neck massage techniques to deal with the pain.

Two years later, Ryan still notices a change in his speech, but most other people don’t. Even though his mouth his frequently dry and his voice gets tired easily, Ryan feels back to where he was before his diagnosis.

“I’d never thought I’d be where I am today,” Ryan reflected. “I remember being in radiation, thinking: ‘This is my new normal. I’m just going to have to adjust to feeling like this all the time. This is the way it’s going to be the rest of my life.’—but it’s not. It’s actually a lot better.”