A Few Drops a Day Can Take the Allergies Away 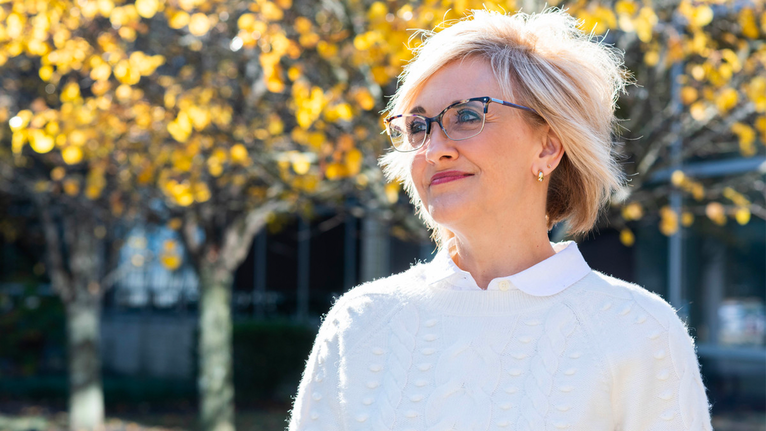 Dorinda Neisel once spent an entire day trying to get out of bed. Each time she would attempt to stand up, dizziness forced her back to the ground. From the floor, she had to crawl on her hands and knees to the bathroom, and immediately back to bed. Her vertigo was so bad she never made it out of her room that day.

“It was chronic,” Dorinda recalled about her prolonged dizziness and ringing in her ears, “to the point it interfered with my driving.”

Dorinda’s primary care doctor suspected neurological issues and ordered a magnetic resonance imaging (MRI) exam. While she was relieved the MRI did not show any reasons for concern, Dorinda was left with more questions than answers.

She visited the Ear, Nose and Throat Clinic on the UC Health West Chester Campus to determine if something within her inner ear was causing her vertigo.

Alfred Sassler, DO, UC Health ear, nose and throat specialist and associate professor of otolaryngology at the University of Cincinnati College of Medicine, conducted a comprehensive evaluation and diagnosed Dorinda with Meniere’s disease, a disorder of the inner ear that can lead to dizzy spells and hearing loss. In most cases, Meniere's disease affects only one ear and can occur at any age, but it usually starts between young and middle-aged adulthood.

While allergies are not the reasons for all causes of dizziness, in patients with Meniere’s disease, it is worth evaluating allergies as an intensifying factor. Dr. Sassler told Dorinda that he may be able to improve her dizzy spells by treating her allergies. Seasonal allergies and pet allergies have always been a nuisance in Dorinda’s life, but she never considered that they would cause life-impairing dizziness.

“Allergies can wreak havoc in your ear, nose and throat area,” says Katie Phillips, MD, UC Health otolaryngologist and assistant professor of otolaryngology at the UC College of Medicine. “When you have inflammation in your nose, it can lead to negative pressure in your middle ears, which can cause ear popping or ear fullness. Allergies can also cause problems in your eyes and your throat and can even exacerbate food allergies—eit really has so many manifestations.”

Dr. Sassler recommended that Dorinda try an immunotherapy treatment. This is common for allergy patients who still have symptoms, despite being on a good medical allergy regimen. Immunotherapy is a process where patients take small daily doses of what they are allergic to so that it gradually builds up in their system, resulting in a less severe negative reaction.

“It's a way to really fundamentally change your immune system's reaction to allergy,” says Dr. Phillips. “Instead of using medication every day which is just treating the symptoms, this is actually treating the cause of the allergies.”

Immunotherapy for Allergies: Drops vs. Shots

Immunotherapy can be administered in two ways—the most common way in the U.S. is by injection, called subcutaneous immunotherapy (SCIT). Another method gaining popularity is sublingual immunotherapy (SLIT) or placing the same substance under the tongue. The SLIT method uses the exact same substance as the SCIT method and is endorsed by the American Academy of Otolaryngic Allergy, a professional otolaryngology academic organization.

Dr. Sassler prescribed the SLIT sublingual immunotherapy for Dorinda. Though not as popular,  it has some advantages, including being an alternative for those who have a fear of needles, or for those who do not want to or cannot come into the clinic weekly. It is still considered generally safe and effective.

Patients receive their dose through the mail and can treat themselves at home following a simple daily regimen. This method is preferable for people who travel often for work, for parents who have young kids at home or for anyone who doesn’t want to drive to their doctor every week.

SLIT treatment is available in two forms: tablets and liquids. The tablets are FDA approved, and can only treat one allergen at a time based on their current design. The liquid drops, while not FDA approved, can be individualized to each patient’s needs and can include all patient allergies.

“It’s a comprehensive way to give allergy desensitization to people,” says Dr. Phillips. Because Dorinda suffers from such a wide variety of allergies and doing her therapy at homemade more sense for her, Dr. Sassler suggested she try the liquid drop form of sublingual immunotherapy.

Dorinda has been placing the drops under her tongue every morning since 2017. She uses five tasteless drops, tucked under her tongue, and holds them there for two minutes before spitting them out.

“Under the tongue is a special area of the body as it can absorb things more directly into the bloodstream, opposed to swallowing them and having to process it through your gastrointestinal system,” Dr. Phillips explains.

The treatment protocol is working for Dorinda.

“I don’t have the dizziness like I used to. I still have episodes with ringing in my ear, but it’s not chronic,” she says . “My quality of life is much better.”

The drops have helped Dorinda’s debilitating symptoms, such as dizziness and ear ringing, and they have also improved the bothersome symptoms of her allergies as well.

“Before I would have to make sure I had a tissue in my pocket or in my purse, and I was constantly worrying about it,” she recalls. “Now, I don’t have to rely on them like I used to.”

“In the future, I think FDA approval will happen as it gains popularity and clinical trials in the U.S. are completed,” says Dr. Phillips. Providers disclose this information to patients and let them make the decision for themselves.

“As as an ear, nose and throat (ENT) medical society, have been doing this for many years,” says Dr. Phillips. “We have good evidence that this treatment is safe and works well for our patients.”

Because it’s not yet FDA approved, the cost of the liquid drops is not typically covered by insurance. However, a five to six week supply is estimated to be around a few dollars per day, noting that the cost may change as the cost of allergens from manufacturers increase regularly.

For people like Dorinda, it’s money well spent, and the convenience makes it worth every penny.

It is important to note that the SCIT treatment often includes copays and deductible fees. Traveling into the clinic each week includes attached costs as well. Additionally, once the treatment begins working, patients spend little or no money on over-the-counter allergy and sinus medications and prescription drug copays.

On average, patients using the SLIT drops method will be placed on a three-year course of the medicine.

While not every allergy patient is a candidate for this type of procedure, people who are interested should talk with their doctor about it. Patients who have uncontrolled asthma, eosinophilic esophagitis or certain problems with their mouth, like leukoplakia, are not recommended to try this treatment. Some doctors may prefer to monitor the bodily reactions to the inoculations in their office, instead of allowing a patient to administer it from home. Dr. Phillips recommends that those who are experiencing symptoms which they believe may be related to allergies should see a specialist to receive a complete evaluation.

To receive the name of an ear, nose and throat specialist on the UC Health West Chester Campus, please call 513-298-DOCS (3627).