Getting Colorectal Cancer as a Young Adult

“We knew it probably wasn’t good because as soon as I woke up from the colonoscopy, the nurse came in and said the doctor wanted to talk to me,” recalls Adam Moser. 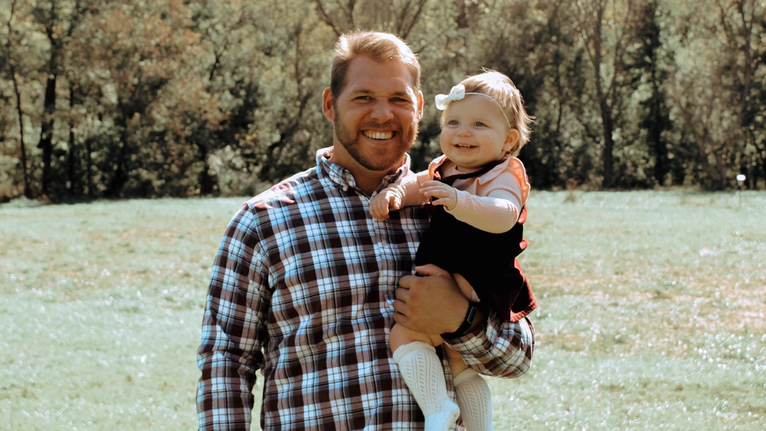 At 29 years old, Adam was regularly discovering blood in his bowel movements, and his then‑pregnant wife encouraged him to seek treatment.

Adam had a colonoscopy at an area hospital, and his premonition about his doctors wanting to talk to him was correct— the colonoscopy revealed a tumor on Adam’s rectum.

The providers at his local hospital told Adam he would have chemotherapy, radiation, then surgery to remove the tumor, which would result in a colostomy, followed by an additional round of chemotherapy.

Adam sought a second opinion, which is when he first met Earl Thompson, MD, University of Cincinnati Cancer Center Surgeon, who told him there was a new, better way to treat rectal cancers.

“This is a leading-edge treatment option,” says Dr. Thompson. “Just within the last couple of years it’s been considered acceptable to move toward a non-operative management.”

A Newer and Better Treatment Method for Colon Cancer

As the region’s only adult academic medical center, providers stay on top of the most recent research and developments. The newest science is leading doctors to flip the treatment schedule to give patients radiation first, then a full dose of chemotherapy. In up to 40% of patients, the cancer goes into remission and doctors may be able to offer a treatment pathway that does not require surgery. A watch-and-wait approach is then put into action, with frequent testing to ensure the tumor does not recur.

“They seemed very confident from the very beginning,” Adam remembers about his choice to seek care at the University of Cincinnati Cancer Center—he had not a doubt in his mind.

His reason to fight this cancer just got bigger—14 days after his diagnosis, his wife delivered their first child, a baby girl named Reagan.

In addition to sleepless nights with a newborn, the radiation and chemotherapy treatments were wiping Adam out on a new level.

“Usually, my alarm clock goes off and I jump out of bed pretty quickly,” Adam says. “But the day after my first chemotherapy treatment, it took me an hour just to get moving.”

The treatments started after Thanksgiving 2020 and finished around Memorial Day 2021, and the six long months of radiation and chemotherapy paid off. Adam had a complete response, and to date, there is no evidence of a recurring tumor in his rectum.

Since remission in May 2021, Adam has had follow-up visits with each doctor on his multidisciplinary care team.

“It involves very close surveillance,” explains Dr. Thompson, who coordinates the follow-up care with providers on his team. “I see him every three months and he has a lot of testing.” Providers look at blood work, CAT scans, MRIs and scopes to ensure the cancer stays away.

Patients like Adam who have had this new, successful total neoadjuvant treatment regimen, have an 80% chance of no tumor recurrence, and surgery will never be needed.

“The problem with rectal cancer is specifically is where it is,” Dr. Thompson describes. “Removing the portion of the bowel that contains the tumor can lead to some lifelong consequences. The hope is that we can preserve normal sphincter functions so patients can go to the bathroom like they always have.”

Patients who go through total neoadjuvant therapy, but might not have as successful results as Adam, still may see benefits. Some patients have tumors that reduce in size, allowing surgeons to keep their colon or rectum intact, meaning no ostomy bag, a prosthetic medical device that collects waste. Other patients may not be strong enough after the surgery to go through the additional round of chemotherapy, so this new approach knocks it out of the way first.

University of Cincinnati Cancer Center Radiation Oncologist Jordan Kharofa, MD, says that while the rates are higher across the United States, they are not universal.

“It seems to be region-specific,” explains Dr. Kharofa, Adam’s radiation oncologist. “There are certain pockets where we’re seeing above-average increases, which includes Southern Ohio and Kentucky.”

The Curious Case of Colorectal Cancer in Young Adults

There are no clear answers as to why younger people are developing colorectal cancer or why it only affects certain areas, but there is research being done all over the world to try and figure it out— including at the University of Cincinnati Cancer Center. Dr. Kharofa and his colleagues are examining bacteria in the gastrointestinal system to see if that can increase the chance for colorectal cancer.

“There’s definitely something diet or environment-related,” Dr. Kharofa says, making this conclusion based on the higher prevalence of colorectal cancer in states that have higher obesity rates. “The individual patients are not necessarily overweight, but these portions of the country are known for having a high sulfur microbial diet which means low in fruits and vegetables, and high in saturated fats, processed meats and low-calorie drinks.” Dr. Kharofa continues. Researchers think those foods are causing a change in the microbiomes of a patient’s colon, which can ultimately lead to cancer.

Because people below the age of 45 are not eligible for routine colorectal screening, Drs. Kharofa and Thompson urge people and their providers to be aware of warning signs. People should take notice if there is a change in their bowel habits—anything from constipation, diarrhea, an increase in frequency, blood in the stool or the feeling that they are not completely evacuating with each bowel movement.

As for Adam, he is still cancer-free, and he never has to look at a calendar to figure out how long it’s been since he was diagnosed—his daughter’s growth shows him every day just how far he’s come.