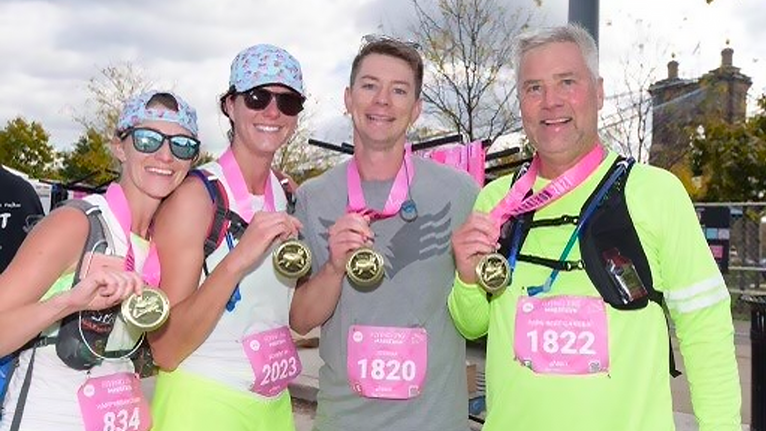 “I already had my appendix removed, so I knew that wasn’t it,” Steve said. After seeing his primary care doctor, who didn’t find anything out of the ordinary, Steve went on with life.

His pain went away, returned a few months later and subsided again—but when the pain returned for the third time, it came back with increased intensity. Steve went back to his primary care doctor, who sent him to have an ultrasound.

Within an hour of the test, Steve’s doctor called him to tell him he had a softball-sized tumor on his right kidney, and it had spread to more than a dozen of his surrounding lymph nodes.

“I spent the next couple of days worrying, wondering how much time I had left,” Steve said.

To complicate matters, Steve and his wife Bobbi had a trip planned to Bahrain to see their son who was stationed with the United States Navy—with their flight leaving four days after his diagnosis.

“No one in my family wanted me to travel,” Steve recalled, “But I hadn’t seen my son in eight months, and I wasn’t going to miss my chance to see him.”

Bruce Bracken, MD, UC Health urologist, was able to squeeze Steve in for an appointment before they left for their trip—on the way to the airport, Steve and his wife stopped at UC Health.

Dr. Bracken confirmed what the previous tests had found, and Steve was officially diagnosed with stage 4 renal cell carcinoma. To Steve’s surprise, Dr. Bracken told him not to worry, to go on his trip and they’d handle it when he returned.

“I was shocked, but I had this sense of relief because Dr. Bracken was so confident,” Steve said.  “He really put us at ease.”

Dr. Bracken described how he would remove the kidney and the lymph nodes in the operating room, then Dr. Tahir Latif, MD, Director of Infusion Services and professor of internal medicine, would treat the suspicious nodules that had developed in Steve’s lungs with immunotherapy.

After their life-changing 30-minute appointment, Steve and Bobbi continued their drive to the airport.

“We went on the trip, we saw our son and we had a great time,” Steve recalled. “I felt at ease knowing this was in the doctors’ hands.”

Within a week of returning from the trip, Steve was back at UC Health, but this time in the operating room. Dr. Bracken successfully removed Steve’s kidney and a couple of dozen lymph nodes, but nodules found in Steve’s lungs concerned the oncology team. Dr. Latif said they were suspicious and likely cancerous, but they were too small to biopsy. The standard of care at that time was to just watch the nodules to see if they grow.

“We chose to treat him with immunotherapy instead, which was not the standard at that time,” Dr. Latif from the University of Cincinnati Cancer Center said, “but we wanted to be ahead of our time, which is what we strive to do in academic medicine.”

As the only academic health system in the region, the University of Cincinnati Cancer Center has access to novel, leading-edge treatments that no one else does. Oftentimes, treatments like the immunotherapy that Steve received, is taken directly from the lab to the bedside—all on the same campus.

“We have a team who takes care of these complex patients,” Dr. Latif stated. “We try to be ahead of time by keeping up with every development, and sometimes we’re even leading the development through clinical trials. That’s what gives us an edge from someone who is just practicing.”

Now considered standard for a patient like Steve, immunotherapy is a type of treatment that harnesses the power of the body’s immune system against the cancer.

“One of the ways cancers survive in our body is by putting out signals that tell our immune system not to go after cancerous cells,” Dr. Latif explained.  “It tricks the healthy cells. These immunotherapy treatments block those signals, and by doing so, those drugs expose cancer cells that are tricking the immune system and the immune system goes after those cells and kills them.”

After Steve recovered from the surgery, he started his infusion treatments. Every three weeks for four months, Steve received immunotherapy and he said it surprisingly came with few side effects.

“I have to say, I am blessed that I didn’t have the heavy-duty chemo that I know other folks have to have,” Steve said. “The immunotherapy, in my experience, was very smooth.”

After the initial round of treatment, Dr. Latif lessened the dose to just one medication every four weeks for the next 18 months.

“Once we knew things were progressing nicely, I decided that I needed to get healthier,” Steve said. “So, what better way than to train for a marathon?” 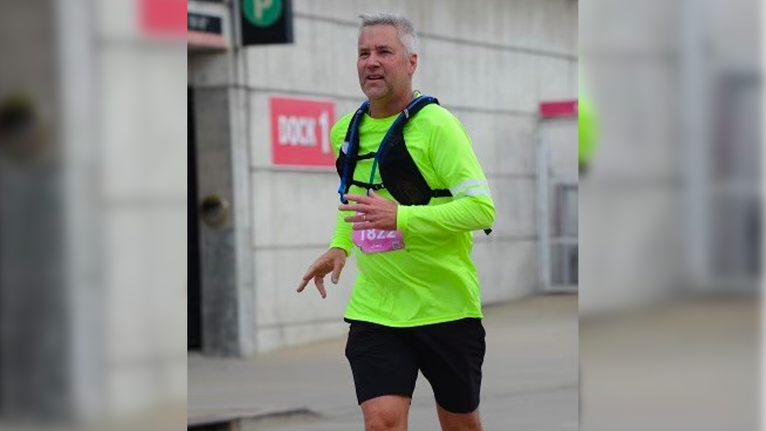 A casual runner before the cancer diagnosis, Steve started regularly running and building his endurance while continuing to receive the drug infusions. He signed up for Cincinnati’s Flying Pig marathon that was supposed to take place in May 2020, but due to COVID-19, the race was pushed back to the fall of 2020, then to the spring of 2021—until finally it was held in the fall of 2021.

“I have three adult children,” Steve said, “and during this whole saga they were encouraging me through the three or four attempts to actually race the Flying Pig. Along the way, they started running and agreed to do it with me, should it actually ever happen.”

Steve held them to it—in the fall of 2021, Steve’s three kids came with their families from across the country to run the Flying Pig marathon.

“All three of my children ran with me and all of my grandchildren were supporting us at various points throughout the race,” Steve remembered. “All four of us crossed the finish line together. It was a wonderful experience to have their support through my treatment, and then to go one step further and support me during the race.”

His care team was impressed.

“I was ecstatic—very happy for him and very proud,” Dr. Latif said. “I admire his persistence and perseverance. Going through these treatments, having the symptoms he was having and still pursuing what he really wanted to do is amazing.”

Steve continues to get CT scans every six months, and the results continue to show the cancer has regressed significantly, but Steve has not taken anything for granted.

“I haven’t looked back,” he said. “I’ve gotten a whole new lease on life, and I feel very blessed that we found Dr. Bracken, Dr. Latif and the whole University of Cincinnati Cancer Center team.”

Just because the cancer is in remission doesn’t mean the family has stopped running—they plan to complete the Honolulu marathon together this December.

For more information or to make an appointment, call the University of Cincinnati Cancer Center at 513-585-UCCC.