Spinal Patient Back to Running Marathons and Enjoying Life

Lauralee Wheat of Cincinnati, Ohio, was in a car accident in 2014 that injured her lower back, compressing the two lowest vertebrae in the lumbar spine. She had an initial microdiscectomy surgery, only to have her back reinjured in another car accident a year later. 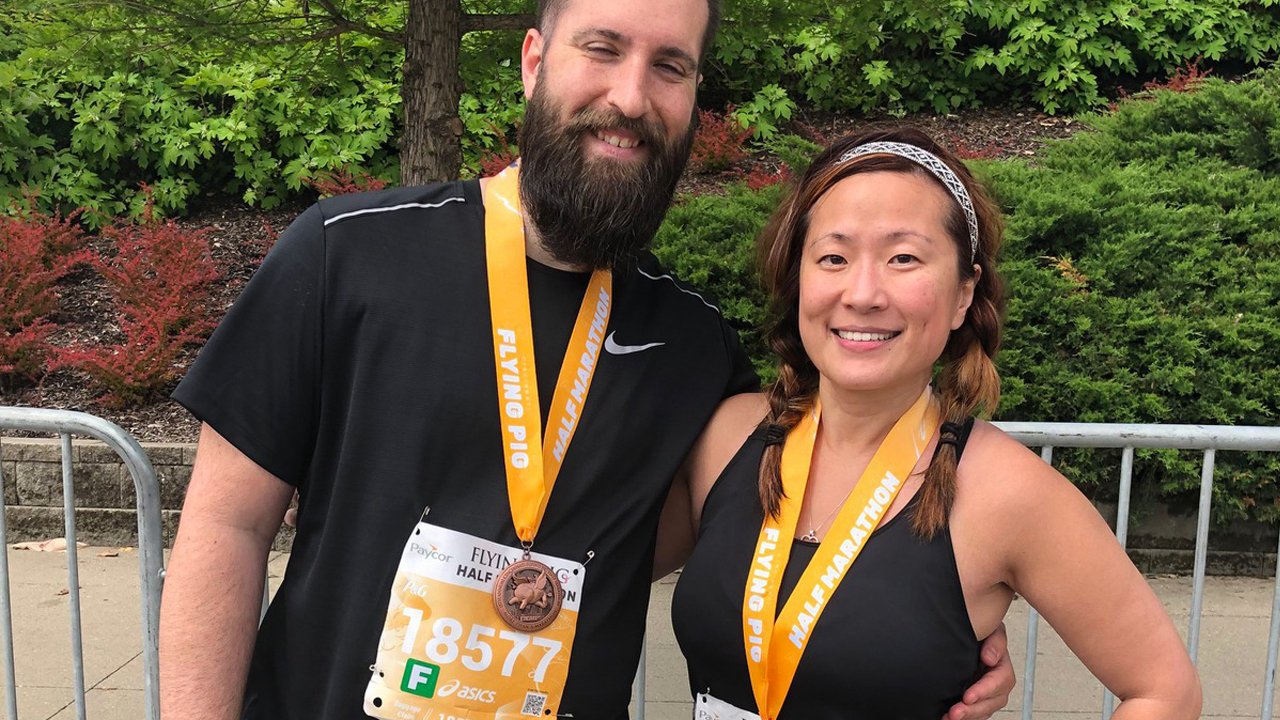 What then followed was a long stretch of pain management, physical therapy and a second surgery to place a cage and fuse in her spine, which only ended up causing her more debilitating pain. Her spinal surgeon felt he did everything possible and was unable to help her further.

Lauralee sought out other opinions, but surgeons were hesitant to operate again, concerned a third surgery would lead to complications like permanent nerve damage.

Her pain became so bad that she could no longer manage her daily commute or work a full day and had to take short-term disability. She could no longer run in half marathons, continue working as a personal trainer, golf or even complete household tasks like vacuuming and laundry. She thought her days of scaling 12-foot walls and crawling under barbed wire during a Tough Mudder race were over. She couldn’t even sit for long periods of time without pain.

A friend then suggested she see Joseph Cheng, MD, Frank H. Mayfield Chair of Neurological Surgery and professor in the Department of Neurosurgery at the University of Cincinnati College of Medicine. Dr. Cheng is also a complex spinal neurosurgeon at the UC Gardner Neuroscience Institute at UC Health.

“I was so worried. I’ve been through all of this with the two surgeries and was convinced no one would want to touch it,” Lauralee said. “I had a list of questions and thought, ‘This is my last chance to find a surgeon,’ and he took one look at my images and immediately pointed out the problem. He took me seriously, and anticipated and answered every question I had before I could even ask.”

“Ms. Wheat’s prior lumbar fusion surgery had a metallic cage implant that got displaced and was scarred directly into her nerve,” Dr. Cheng said. “The bottom line is that this type of surgery can be fraught with high risk and complications, like possible permanent nerve injury—it’s why many surgeons would not want to operate, but we see these complicated cases more often.”

At Lauralee’s consultation appointment, Dr. Cheng went over her case in detail and presented her with two surgical options. He explained the risks of both, but ultimately left the decision up to Lauralee. The first option was called ALIF (anterior lumbar interbody fusion), which is an incision from the front and back and would have a cage placed in the front. The other option was called PLIF (posterior lumbar interbody fusion), where he would only go through the back for the entire surgery. With Dr. Cheng’s guidance, Lauralee decided the best option for her situation was PLIF.

“Aside from referrals from other physicians and surgeons, many of our patients are those who have had surgeries that didn’t go as hoped,” Dr. Cheng said. “I think the differentiating factor is the fact we are subspecialists in our field.”

Dr. Cheng also stressed the importance of each of the neurosurgeons at UC Health having subspecialty care expertise that makes them frequently sought after from as far away as Connecticut, Michigan and Tennessee.

“People paint neurosurgery with a big paintbrush, but in our academic center, we are specialists in areas that are very specific, whether it’s a complex spine problem, aneurysm or vascular malformation, pituitary tumor or acoustic neuroma,” Dr. Cheng said. “We have surgeons with specific expertise for that disease. They are the ones who lead the research in order to train and educate future specialty neurosurgeons with the most up-to-date techniques.”

Dr. Cheng continued, “As an academic center, we are focused on our data and outcomes to continuously look for ways to improve the care we can provide our patients, and be a resource to our medical community for these complex issues. Those we train are also those who we expect to take care of us in the future.”

After a six-hour surgery, Lauralee followed his post-operation recommendations to rest for two weeks. Her staples were then removed and she was able to walk more easily. Going for short walks would exhaust her, and she struggled with depression, feeling guilty for not being able to help with small tasks around the house. Although her first few weeks of recovery were a roller coaster, her care team said that was expected. Lauralee stayed positive and pushed herself to continue walking, even on days she didn’t feel like it. After a rough six months, her recovery turned a corner.

“I can honestly say I think Dr. Cheng did a miracle job. My friends are surprised at the turnaround and my recovery,” Lauralee said.

Now, more than a year after the surgery, “There are days I forget I even had surgery, and it’s been a long time since I felt that way.” 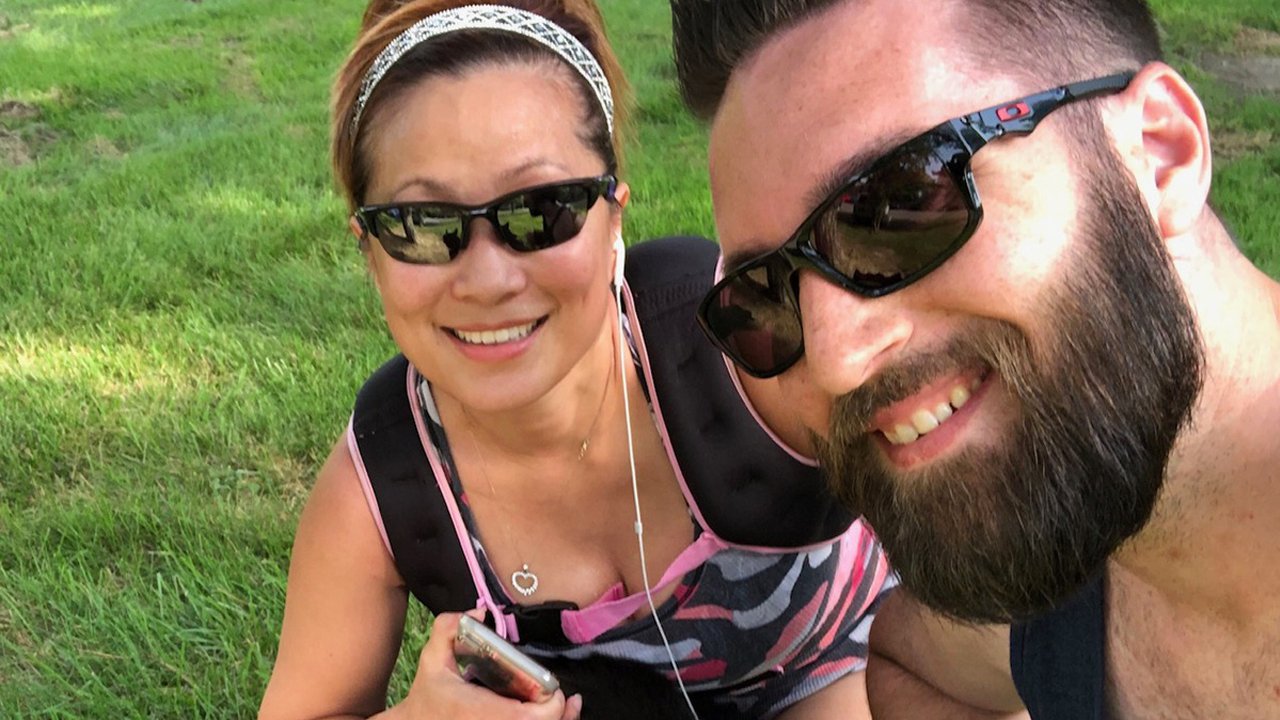 Running, lifting weights, yoga and spinning are all activities she can enjoy again. She even participated in the Flying Pig Half Marathon on May 5, 2019.

“I am back to an active lifestyle now and I wasn’t sure if I’d ever be able to do that. Before seeing Dr. Cheng, I felt like I was just laying around my house, not a great quality of living. Now, I feel like I really have my life back,” Lauralee said.

“Referrals come to UC Health for our complex spinal care and neurosurgical capabilities,” said Dr. Cheng. “It’s why we can take care of cases that others won’t touch—and it’s not because these patients can’t have a good outcome elsewhere, but they know we have the expertise and specialty care that other places don’t.”

Lauralee felt it was important to share her story, because, “So many people might be afraid of surgery again after a bad experience and may still be struggling, but I definitely recommend seeing Dr. Cheng at UC Health.”