An inspiring story of how cellular therapy helped one patient overcome lymphoma. 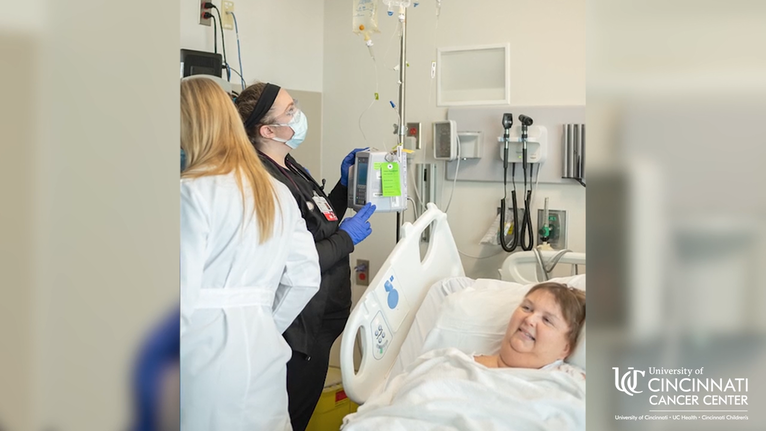 Jina Berger was stunned by the diagnosis of an aggressive cancer. A chance for a cure came in the form of a first for the University of Cincinnati Cancer Center’s Bone Marrow Transplant team.

Jina Berger was home with her high school-age daughter when everything in her life suddenly and dramatically changed forever.

A lifelong resident of small-town Milan, Indiana, Jina found herself undergoing bloodwork and urine testing at her local hospital.

“The doctors did the testing, and they asked me ‘how long have your kidneys been like this?’” Jina explained, and she asked, “what’s wrong with my kidneys?”

“You’re in kidney failure,” they said.

Jina was given a choice of transferring to the University of Cincinnati Cancer Center, or a hospital in Indianapolis. “I chose UC because I’d heard great things about it, and because it was closer to home,” she said.

Jina got the news no one was expecting: a diagnosis of cancer. It was a particularly aggressive form of lymphoma, or blood cancer. 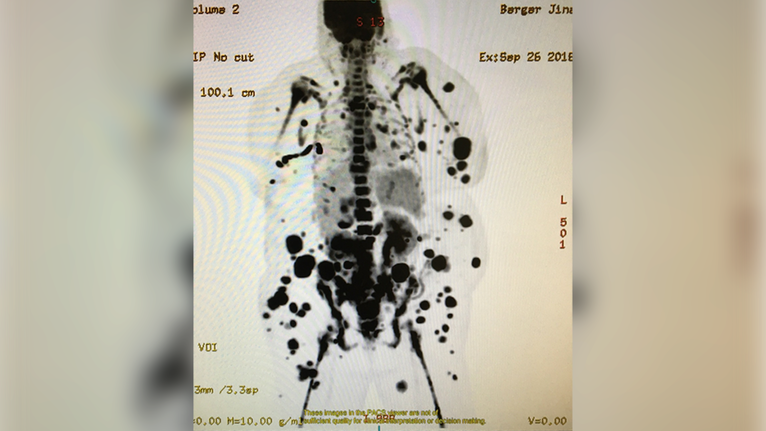 Lymphoma is a type of blood cancer that affects about 200,000 Americans each year. Lymphoma occurs in the lymphatic system, which is the network your body uses to fight disease. It includes the spleen, lymph nodes, thymus gland and bone marrow.

A New Therapy and A Very Dedicated Care Team

To combat her lymphoma, she underwent two cycles of chemotherapy‑but her cancer journey didn’t end there. Twenty percent of patients diagnosed with lymphoma don’t respond to conventional therapies, such as chemotherapy or radiation. In Jina’s case, the lymphoma came back after both chemotherapy and stem cell treatment.

“Dr. Latif thought I would be a good patient for a new treatment called CAR T-cell therapy,” Jina explained. “It was the first time they performed it at UC. I know he wouldn’t have recommended it if he didn’t think I was a good candidate.”

What is CAR T-Cell therapy?

T-cells are a type of white blood cell that help make up your immune system. Chimeric antigen receptor, or CAR T-cell therapy, is a promising new therapy that gets T-cells to fight cancer. It works by changing a patient’s T-cells in a lab so that they can find and destroy cancer cells, like tiny, well-trained soldiers.

CAR T-cell therapy is often administered with just a single infusion. Patients need to stay in the hospital to be monitored for side effects but are often able to go home within two weeks.

CAR T-cell therapy is FDA-approved for certain lymphomas and for some patients with acute lymphoblastic leukemia that doesn’t respond to other treatments. Many clinical trials are underway with the hope of using this strategy to treat other cancers.

CAR T-cell therapy may be an option when first or second-line treatment options have failed, or if cancer has returned after previously being treated.

“We take the T-cells and turn them from being ordinary soldiers into commanders. Then we give them back to you so they can fight even more for you,” said Dr. Latif.

For many patients, especially those facing long and complex health concerns like blood disorders or cancer, the physicians, nurses and other members of the care team offer knowledge, compassion, support and guidance. It was support Jina needed as she recovered.

There are known risks associated with CAR T-cell therapy, including neurological factors. Jina fell into a coma and required intensive care for several days following her CAR T-cell therapy infusion. When she woke up, she needed weeks of rehabilitation.

“My care team rocks. They did a great job. They were very supportive, and I appreciate everything they did. My family and friends kept pushing, offering prayers and positive thoughts,” Jina says. “You have to have faith in your nurses and your doctors. And the big guy upstairs,” she concludes, motioning up.

A Small Town Rallies Around One of Its Own

Jina’s hometown of Milan, Indiana is just an hour from UC Cancer Center, but a world away from Cincinnati. With only 2,000 residents, it’s a town where most everyone knows everybody.

“Milan is a small community. Everybody pulls together. They were so supportive,” Jina said.

Her cancer treatments and CAR T-cell therapy coincided with her daughter’s senior year of high school, a bittersweet and tender year for many families.

“It was my daughter’s senior year of volleyball, and they organized donations for me. And then an anonymous donor matched all the income for that,” she said. “It was a huge help.” 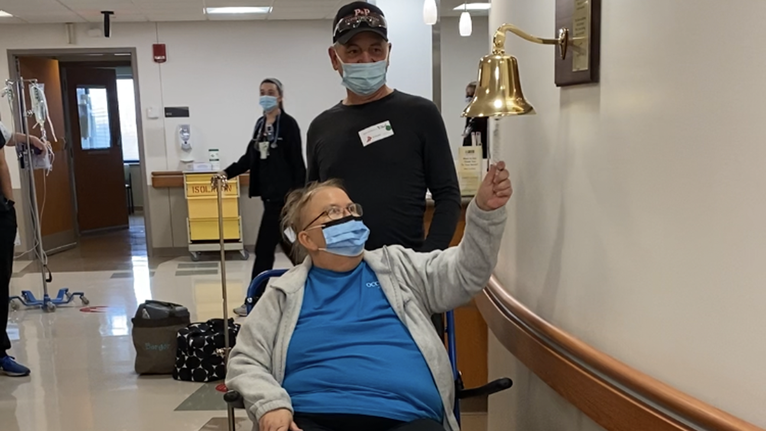 A bright outlook for the future

Jina completed her cancer treatment in summer 2021 and has been in remission ever since.

As for other cancer patients, Jina offers this advice: “I would tell them it’s in God’s hands. Take one day at a time and never take life for granted.

“Hope is a lot stronger for me now. I never really thought hope was anything big. But now, going through what I’ve been through, I wouldn’t change any of it.” 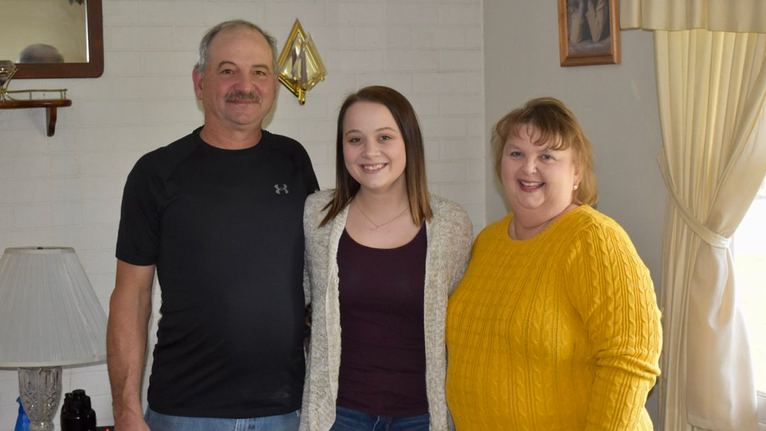 Signs and symptoms – listen to your body.

Major symptoms of lymphoma can include fatigue, weight loss and enlarged lymph nodes. Other symptoms include night sweats, fever, loss of appetite and itchy skin.

Jina’s experience leads her to advise others to always listen to their bodies. “Your health is important. When you don’t feel good, talk to your doctor.”

The University of Cincinnati Cancer Center is committed to advancing medical options and expanding stem cell transplant accessibility to more cancer patients. For more information or to schedule an appointment, call 513-584-4268.