CINCINNATI - A new treatment for acute ischemic stroke is now available to patients across Greater Cincinnati, thanks to the stroke experts at UC Health’s UC Gardner Neuroscience Institute. 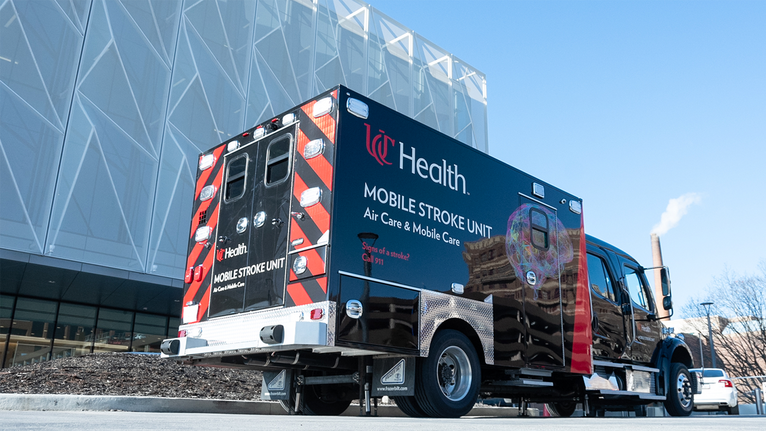 Tenecteplase (TNK) is a powerful blood thinner that can break up blood clots in patients experiencing an acute ischemic stroke, which is caused by a blood clot or sudden blockage of an artery that supplies blood to the brain. Unlike current treatments for ischemic stroke, TNK is administered in a single injection that takes just seconds.

“Large clinical studies in ischemic stroke patients have repeatedly shown that giving a medication such as TNK can increase the chances of a return to pre-stroke activities and reduce disability. Since almost 2 million brain cells die every minute in stroke, the faster we give this medication, the better chances we have of it working,” Stacie Demel, DO, PhD, a vascular neurologist at the UC Gardner Neuroscience Institute, co-director of the UC Stroke Team, and associate professor of clinical neurology and rehabilitation medicine at the UC College of Medicine said.

TNK is specifically designed to target fibrin, which is the major component of a blood clot. This type of medication, called a fibrinolytic, has been used for almost 30 years in stroke therapy. Compared to previous medications in this class of drugs, however, TNK may be better at breaking up blood clots in the arteries that feed the brain and be safer for patients.

Importantly, there are time-based criteria that must be followed to receive TNK. That is why it’s imperative to call 911 immediately at the first sign of a stroke. An ambulance will transport the patient to the closest emergency room where members of the UC Stroke Team will assist the local emergency room physician in deciding if TNK administration is the best course of treatment.

TNK is now available to patients at UC Health hospitals and via the UC Health Mobile Stroke Unit. UC Medical Center and West Chester hospitals were the first hospitals in Greater Cincinnati to implement TNK in mid-August. UC Health has also led the regional implementation of the treatment, providing virtual and in-person training and education to several community hospitals that now offer TNK as well.

“The University of Cincinnati Stroke Team provides rapid decision-making for all strokes presenting to any emergency department in the Greater Cincinnati/Northern Kentucky region,” Dr. Demel said. “We have supported the transition from alteplase (tPA) to tenecteplase at most of our community partners already, with the few remaining hospitals planning to switch to tenecteplase in the near future.”

The UC Stroke Team has been Greater Cincinnati’s leader in stroke care for more than 30 years. The team is responsible for the acute care of stroke in almost 30 different hospitals across Greater Cincinnati, available 24 hours a day, 7 days a week, 365 days a year.

A national leader in stroke research, the UC Gardner Neuroscience Institute is also the national coordinating center for the National Institutes of Health’s StrokeNet research network.