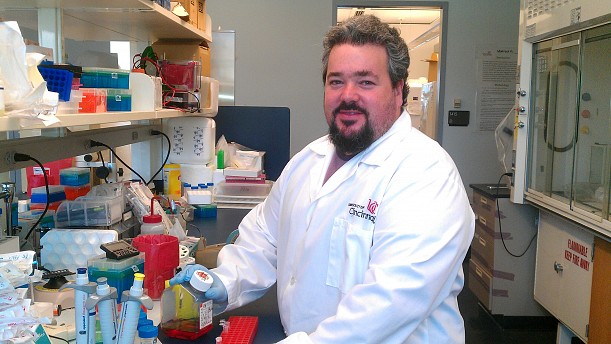 CINCINNATI—A new oral vaccine that produces a novel two-pronged immune system attack on cancer cells could be effective in preventing breast cancer recurrence, according to findings from a collaborative research team from the University of Cincinnati (UC) Cancer Institute and the National Institutes of Health (NIH).

This is the first scientific report of using oral delivery of a unique virus—known as recombinant adeno-associated virus (AAV)—as a cancer vaccine. First author and UC College of Medicine research assistant professor Jason Steel, PhD, and colleagues reported their findings in the Jan. 8. 2013, issue ofMolecular Therapy, the journal of the American Society of Gene and Cell Therapy.

Although other oral breast vaccines have been studied in animal models, these vaccines raised human safety concerns because they used bacteria known to have potential harm to human health.

In conjunction with NIH researchers, the UC team sought to develop a vaccine using AAV, a virus that has been shown to have minimal negative effects on human health and is currently being investigated as a gene therapy platform for treating inherited genetic disorders.

“AAV is special because the virus survives the stomach,” explains Steel. “Normally, you introduce a virus by mouth and it is broken down in the stomach. This virus is resistant to breakdown, which opened up the possibility of administering it orally as a cancer vaccine.”

In this preclinical animal study, the UC team tested two strains of AAV—one that was able to escape the stomach and move into the bloodstream, the other staying in the stomach. Studies were conducted to show both short-term and long-term impact on the reduction of breast cancer tumors. The team also evaluated which delivery method was more effective—oral versus the traditional intramuscular injection.

“The strain that remained in the stomach was more effective at preventing breast cancer tumors than the strain that traveled systemically—100 percent of study subjects had no tumors for over a year following the treatment,” says Steel. “Additionally, we showed that oral delivery (versus intramuscular injection) was more effective, resulting in a stronger immune response with greater than a 100 percent increase in anti-tumor antibodies at the lower doses and increased survival.”

Researchers say this AAV-based oral cancer vaccine holds potential as a human breast cancer prevention tool in individuals who have been treated for a certain type of breast cancer or those deemed at increased risk for the disease.

“We have done similar studies with different virus strains that have produced an antibody response,” adds Steel. “With this virus, we get both an antibody and a tumor-killer T-cell response. By combining the two mechanisms of action in one vaccine, we are creating a two-pronged immune system attack on the cancer cells that appears to be more effective.”

The UC team expects to begin testing the AAV-based oral vaccine for prevention of other cancers, including lung cancer, in 2013.

The study was funded in part by the National Cancer Institute, National Institute of Dental and Craniofacial Research and startup funds from the UC Cancer Institute. UC postdoctoral fellow Charmaine Ramlogan, MD, and senior author John Morris, MD, UC professor and director of phase-1/developmental therapeutics, collaborated in this study. Giovanni Pasquale, PhD, Vyomesh Patel, PhD, and John Chiorini, PhD, of the National Institute of Dental and Craniofacial Research, also contributed to this study.

About the UC Cancer Institute

The University of Cincinnati Cancer Institute is one of four UC and UC Health partnerships that brings together patient care, research and education initiatives. Many researchers and clinician-scientists at UC are also part of the Cincinnati Cancer Center, a collaborative initiative of the University of Cincinnati, Cincinnati Children’s Hospital Medical Center and UC Health. The center’s ultimate aspiration is to create a world-class comprehensive center leading in innovation to eliminate cancer.