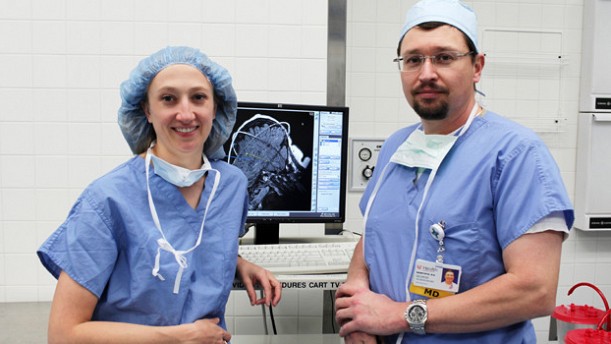 CINCINNATI—For more than 15 years, deep brain stimulation (DBS) surgery has been an important treatment option for people with Parkinson’s disease, a disorder of the nervous system caused by a lack of dopamine in the brain.

Although the treatment is approved by the U.S. Food and Drug Administration (FDA) for patients who no longer respond to medication and who typically have suffered symptoms of the disease for 10 or more years, a European study published this month in the New England Journal of Medicine is causing doctors to ask whether the procedure should be offered earlier in the disease process.

“This new study gives scientific support to the notion that patients may experience the largest amount of benefit from deep brain stimulation surgery if they have the procedure earlier rather than later,” says Fredy Revilla, MD, associate professor of neurology and rehabilitation medicine and director of the James J. and Joan A. Gardner Family Center for Parkinson’s Disease and Movement Disorders at the University of Cincinnati Neuroscience Institute, one of four institutes of the UC College of Medicine and UC Health.

“In our own experience here at UC we have too many patients with Parkinson’s disease who want to have the surgical procedure but no longer qualify for it because of the presence of cognitive impairment or other co-morbidities that occur with longer duration of disease. In other words, we waited too long. A very careful selection process to determine who is a candidate for surgery is still warranted, but more patients with Parkinson’s disease should be able to access this therapy, based on these recent findings.”

In a typical treatment scenario, a patient has lost 50 percent of his or her dopamine-producing neurons when symptoms first appear and a diagnosis is made. The typical patient is then treated with medications for 10 to 14 years.

During that time, medications can offer symptomatic relief from tremor, slowness of movement, stiffness, and walking problems, but cell loss continues unabated. There is at present no cure for the disease.

“For those who have Parkinson’s disease, medications to restore the needed balance of dopamine quickly become a way of life,” says Ellen Air, MD, PhD, assistant professor in UC’s department of neurosurgery and a neurosurgeon at the Gardner Center and Mayfield Clinic. “For most, these medications are very much a miracle, releasing the stiffness and calming tremors.

“Over time, however, the medications’ effect shortens, becomes less predictable, and leads to large swings in motor function. Daily life becomes a roller coaster, moving from extremes of slow and stiff movement to uncontrolled twisting movements and back, often over just a few short hours.”

DBS surgery becomes an option in patients who experience benefits from dopamine-replacement medication but whose symptoms have become severe. The procedure involves implanting tiny electrodes deep inside the brain and connecting them to a programmable, battery-powered device that creates electric pulses. The device, which resembles a heart pacemaker, is implanted beneath the collarbone. Electrical impulses from the electrodes work by regulating or overriding faulty signals caused by the disease.

“Deep brain stimulation provides effective treatment of Parkinson’s disease for those experiencing these side effects of dopamine therapy,” Air says. “We generally wait to consider DBS until the disease and the medication side-effects are severe and are impairing the patient’s ability to work, socialize and enjoy life.”

Although that timetable is usually a decade or more, the FDA’s approval of DBS for medically refractory Parkinson’s disease does not specify a time course. “We have done surgery on patients within five years of diagnosis because of symptom severity,” says George Mandybur, MD, associate professor in the department of neurosurgery and director of the NeuroRestorative Program at the UC Neuroscience Institute.

Doctors have tended to postpone surgery, Air says, because they want to confirm that the patient has Parkinson’s and not another condition that may mimic Parkinson’s in the early stages but that will not respond to DBS. Doctors also have lacked good evidence about the optimal timing of surgery.

The research by German and French researchers, led by Günther Deuschl, a professor at Christian-Albrechts-University in Kiel, Germany, and published Feb. 14 in the New England Journal of Medicine, provides new evidence that may alter the conventional wisdom of late surgical intervention. The German-French study, known as the EARLYSTIM trial, enrolled 251 patients who had been diagnosed with Parkinson’s disease an average of 7.5 years earlier and had not yet lost occupational and psycho-social function. The participants were randomized to one of two groups: one that received continued medical therapy, and another that received DBS surgery. Over two years of follow-up, those who underwent DBS showed a 26 percent improvement in quality of life compared with no improvements in patients treated with best medical therapy alone.

The study was partially funded by Medtronic, Inc., which makes DBS products.

The EARLYSTIM study’s results were not necessarily surprising. The safety and tolerability of DBS in early Parkinson’s disease has been studied for several years by David Charles, MD, the chief medical officer of the Vanderbilt Neuroscience Institute who lectured about the topic at UC in 2008. Meanwhile, preliminary laboratory research performed at UC http://healthnews.uc.edu/news/?/7426/ found that DBS halts the progression of dopamine-cell loss in animal models. That research grew out of an observation by physicians, including Mandybur, about patients who underwent DBS.

“We noticed that in some patients the disease did not seem to progress as rapidly after surgery as it did before the surgery,” says Mandybur, a neurosurgeon with the Gardner Center and Mayfield Clinic. As a result, he and others theorized that DBS not only alleviated symptoms, but also provided neuroprotection.

Air cautions that DBS is not a cure-all for Parkinson’s disease and that it only improves some symptoms. DBS does not improve the declines in memory and thinking that come with Parkinson’s.

The study reported surgical complications that were no higher than complications in previous studies of patients with more advanced disease, but it did suggest a higher rate of depression among those who underwent surgery. “This highlights the importance of both pre-operative screening for psychiatric disease and post-operative monitoring,” Air says.

Air notes that more study is needed before large-scale changes in practice can be recommended. “However, this study pushes us to rethink when and for whom surgery is suited so that we can help those with Parkinson’s disease maximize their quality of life,” she says.